Geotextiles are permeable fabrics, which means that liquids or gases can pass through them. When used on soil, they can stabilise and protect them. They are also very useful for dust control.

Geotextile products include mats, plastic covers and erosion control blankets, and range from those that physically shed water to those that incorporate seed and mulch and support vegetation while protecting bare soil.

Erosion control batter blankets are a specific group of proprietary, rolled erosion control products, usually biodegradable. They provide an instant, short- to medium-term protective cover of the soil surface. They do this by shielding it from the erosive forces of wind, raindrop impact and sheet flows until a vegetative cover can be established or other stabilisation is done.

Geotextiles instantly reduce the erosion potential of disturbed soil and/or reduce or eliminate erosion on critical sites from wind and water. They can be a permanent or temporary measure.

Geotextiles are mainly used on areas that are difficult to stabilise, for example:

Geotextiles have the following limitations:

This section covers some essential points, but you should also always check the manufacturers’ product information sheets for specific construction specifications.

The geotextiles covered are:

Woven geotextiles are used in high flow situations such as channels and flumes.

Material subtype
Design criteria
All
Use biodegradable, rolled erosion control products if you need vegetation growth. They will stabilise against raindrop erosion and low velocity flows until the vegetation is established.
These products are usually made of jute fibres, curled wood fibres, straw, coconut fibre or a combination. To be 100% biodegradable, the netting, sewing or adhesive system that holds the mulch fibres together must also biodegrade. The types below meet these requirements.
Choose the type of product according to your site-specific conditions and the manufacturers’ recommendations.
Jute 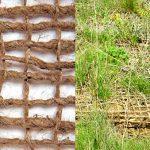 Jute is a natural fibre that is made into a yarn and loosely woven into a mesh. It lasts for about a year. Use it with vegetation.
It comes in rolled strips and needs to be secured to the soil with U-shaped staples or stakes, to the manufacturers’ recommendations.
Straw blanket 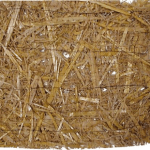 Coconut fibre mesh
Coconut fibre mesh is a thin permeable membrane made from coconut or corn fibre that is spun into a yarn and woven into a biodegradable mat. It is designed to be used with vegetation and usually lasts several years.
The mesh comes in rolled strips which you secure to the soil with ground staples or pins, to the manufacturers’ recommendations.

Material subtype
Design criteria
All
These are biodegradable fibres, eg wood or coconut, with a heavy polypropylene net stitched to the top and a high-strength continuous filament geomatrix or net stitched to the bottom. They are designed to enhance revegetation.
The material comes in rolled strips and is secured with ground staples or pins, to manufacturers’ recommendations.

We have covered the following points when constructing and operating geotextiles and erosion blankets:

Install geotextiles and erosion blankets to the manufacturers’ recommendations, which will usually include a method like this:

When maintaining geotextiles and erosion blankets

Inspect areas treated with temporary soil stabilisation daily and after each rainfall. Things to look out for are:

Reapply or replace geotextiles on exposed soils if the area becomes exposed or shows signs of erosion. If necessary, erect a temporary barrier and/or signage fencing to restrict uncontrolled movement of equipment and vehicles onto the treated areas.